Who is to blame for measles outbreak? Yuppies, or Yippies?

The possible spread of the the measles outbreak in Swansea should be a real cause for concern and not just for parents who swallowed the Andrew Wakefield discredited claims for a link between the MMR jab and autism. It's easy to say, "Oh! I blame the parents", much as we would regarding child sex abuse in the Catholic Church. Why let your kids associate with, and show respect to, a known set of paedophiles, and so on. More justifiable is the blame attached to the press, nothing sells like a good health scare. Why it's almost as good as a royal scandal. Well there's a health scare now all right and it's a real one this time. Ben Goldacre was on the case regarding Wakefield right from the start and much interesting detail can be found on his site. But apart from gullible but well meaning parents and equally gullible but totally amoral journos I feel that some of the blame may lie a bit closer to home. The radical movement of the 60's and 70's wanted more than a mere economic revolution, we wanted to change everything. To call into question everything and although a great deal of good came out of this we also, in some instances at least, threw the baby out with the bathwater. I know from bitter experience how perfectly viable political groups ended up peering into their own stern-tubes and drowning in a mire of homoeopathy and tarot readings. Science was a part of "the system" and to be treated with suspicion and eventually much of this would filter through to the mainstream leaving us with a lot of people who are more inclined to listen to some New Age bullshit than the dull (but knowledgeable) local GP.
Posted by ray at 21:20

Email ThisBlogThis!Share to TwitterShare to FacebookShare to Pinterest
Labels: The nature of the beast.

What I find fascinating is the distribution of low MMR take up. Some areas,like Swansea, have disproportionately high numbers of non vaccinated kids compared to where I live in North Somerset.
Where is the advice not to innoculate coming from? Is it hearsay,local myth making, the result of real fear of having an autistic child (especially to poor families)? I don't trust GPs either to give the right advice, my daughter, on requesting MMR vaccination for her son during the time of the scaremongering was advised by her GP that "its up to you" and would not commit himself one way or the other.

To call into question everything and although a great deal of good came out of this we also, in some instances at least, threw the baby out with the bathwater.
Yes. Damn right we did. People questioned but never listened to answers. Your excellent post made me cringe. I remember touring hospitals and mental asylums railing in favour of the anti psychiatry movement. Swallowed bull from that asshole, R.D.Laing, until Anthony Claire dragged me back to my senses. What damage we did to those who needed help, who needed asylum. But the problem was deeper; anti science gave way to a lasting belief that politics could over ride scientific truth. We see it today with the Green movement. I still cannot believe how stupid and anti science were the Greens in the Italian Parliament when I outlined proposals for organ transplants; they thought cycling in the country was the solution to a national shortage of kidneys. I recall the early hippie days when all the Swansea anarchists were hippie arts and politics students, who never argued, never produced evidence, just went with their beliefs. Trouble is, it is still there dominating issues that need scientific evaluation.

Don't recall Doc Buggerall or anyone else touring the psychiatric hospital I worked in to spread the anti-psychiatry message. Maybe he was undercover.

Anonymous, I recall speaking at 5 hospitals. One was a large psychiatric institution which had been the subject of an official inquiry, the other four were scattered around the country - Burton, Manchester,..... Do you have a problem with my post? Do you disagree with what I said? Sorry I missed you. Were you waving your left wing flag? Or were you one of the Swansea psychiatric experts - I can remember a couple of male nurses from those days who wrote bits in Alarm. Several college drop outs took up psychiatric nursing, followers of Laing, some were. Why do you feel a need to make smart comment about being undercover? Now dig up some material on the anti psychiatry courses taught at the Univ Kent during this period.

Measels or mental health the solution is simple enough. Love, understanding and medication.

Agree with you Gitanex, but the problem was diagnosis and medication. I visited places where women had been incarcerated for 30 years because way back in their teens some doctor had diagnosed promiscurity, then bad behaviour led to drugs and ect. So we railed against this, and cost containing governments - Thatcher - saw an opportunity to turn mental patients out - those who needed asylum too. A great tragedy. I see my errors and want others to learn from them

I work with some seriously ill people with severe mental health issues and little has changed. The diagnosis is taken on a 20 minute chat with a qualified? doctor. We've had the experience of attending the funeral of someone who suffered fatal heart problems caused by anti-psychotic drugs. The side effects of drugs used to socialise those unfortunate enough to be diagnosed as "schitzophrenic" (cancers, ulcers, red blood cell increase, obesity, severely shortened life expectancy etc etc) is an unvoiced tragedy for those working with them.
All to often doctors will trend on diagnosis. Therefore we have waves of different diagnosis over a period of time, a person diagnosed as schitzophrenic may be rediagnosed as having a personality disorder and the drugs that have kept the patient stable for years withdrawn, resulting in severe mental trauma.
Some poor mental health sufferers prefer the safety and rythm of the asylum and I believe should be able to refer themselves if they so desire. In my experience there is no off the peg or one size fits all solutions to improving mental health and I, because of the tragedies I've witnessed, can't help but despise those practitioners who in the name of trendy medicine fuck up so many vulnerable lives. 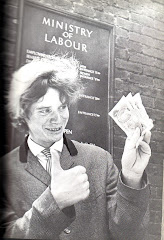